Thanks for following along so far up to Part 3. It's not long now until we meet the POTUS!

On Wednesday afternoon, we arrived in New York City. That night we were invited to be in the audience of CNN's Black, White, and Blue: America 2016- town hall on a nation divided. Brian was invited by the moderator himself, Don Lemon, and was going to ask a question.


A car service (complete with carseat) picked us up at La Guardia. I felt like a VIP. *smile* Our hotel was located directly across from Central Park and a few blocks from the Time Warner Building. For some miraculous reason, our room was upgraded to a suite (that was larger than the apartment we'd had for 6 years in Boston.) By the time we checked in, we had 2 and 1/2 hours until the babysitter arrived to walk to the mall, find clothes for tomorrow, and be back at the hotel. We had only packed for 24 hours (and NOT for meeting the President.) Frankly, it was the best excuse I'd ever had to buy a new dress. It seems like it would be exciting, right? We were speed shopping. After a cross country flight. With a travel-weary 5-year-old. (That last part takes the glamour right out of it.)

Beni was the big winner and ended up with two adorable and sparkly dresses, coordinating sweaters (one with sequins), along with a pair of black sparkly sneakers and two glittery headbands (one with cat ears, one with a crown. Of course.) Brian got a new suit, 2 shirts, 2 ties, socks, and had the suit tailored for him within 30 minutes. There was 30 minutes left for me to find something. (We mamas often only get "the last 30 minutes" for ourselves.) I got... a pink cashmere cardigan to wear over the dress I'd already had to change the look. Unfortunately, I was unable to find a dress suitable to meet THE POTUS. Fortunately the dress I'd brought was black and not very memorable. And I'm certain no one but me was very concerned with my appearance.

After a sweaty speed walk back to the hotel, I ordered Beni a $30 kids meal (of which she only ate 3 bites). Her meal arrived right after the $35/hr (plus cab fare home) babysitter the hotel concierge arranged for us. (My dear friend, Alexis, was unable to stay with Beni and we didn't have time to ask anyone else we knew in NYC.) I got dressed in less than 10 minutes, gave the sitter, named Honeybee (yes I clarified that), the deets on Beni's bedtime routine, and we were off. To the CNN studio. In the elevator I looked at Brian and said, "We just left our daughter in the care of someone we'd never met named Honeybee." Life was surreal.

At the Time Warner building, we were escorted from the main lobby to the CNN foyer on the 5th floor. When we got off the elevator, about 5-8 men were standing and talking. They all recognized Brian and introduced themselves. At one point, the large flat screen TV in the lobby showed scenes from one of the slain DPD officer's funeral service. Brian had a strong emotional reaction and all the men became silent. He went to the restroom to collect himself. I was/am still not used to seeing this level of emotion from him.

While we were waiting to be taken from the CNN lobby to the studio, Brian was receiving texts from ABC producers about the show the next day in DC. There was a problem getting the Secret Service clearance for our daughter. We didn't have her social security memorized, and hadn't even known about the DC trip until after we landed in NYC. I sent a frantic text and Facebook message to our dear accountant (we love you Dianne Moore in ATL!) requesting her to get it for me if she was able. A few minutes after I sent the text, the ABC producer told Brian that George Stephanopoulis was calling the White House himself to request they clear our daughter even without her social security number. since she was only 5. (Yes. I just said that.) George Stephanpoulis called the White House to discuss OUR CHILD. My dear Readers, I don't think I can express how bizarre it felt to be living this. 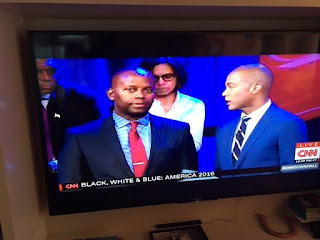 Brian was taken up to the "green room" to have his face powdered. Next to Bishop TD Jakes. And of course I know who TD Jakes is. I watch Oprah. 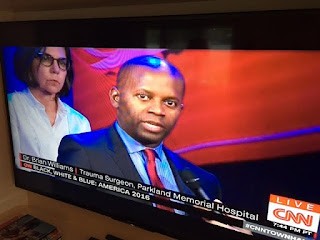 Eventually, we were led into the studio. It seemed so much smaller in person than it did on TV. The show was 2 hours and live. Brian was one of the audience members who asked a question. After the show, Don Lemon said to Brian- Hey! You didn't cry on national tv tonight!


It was 12:30am by the time we left the Time Warner building. We had 30 minutes to get back to Honeybee (she was great with our daughter, BTW) and Beni. We grabbed Subway (the only quick restaurant we saw open in the next two blocks) and headed back to the hotel. Sadly, we needed to leave the apartment-sized room to catch a 7:30am train to DC. We didn't get to enjoy the suite, Central Park, NYC, or visit with any friends. But we were meeting the President (!!!), and that made up for it all.

Stay tuned for the final installment- meeting the POTUS!

Nourish: to support the growth of, to feed, sustain, support

Create: to make or bring into existence something new

Bloom: to mature into achievement of one’s potential, to flourish in freshness or excellence, to shine

Kathianne
Welcome to NCB! I'm a mama, life coach, dietitian, and artist presently planted in Dallas. I envision this site as an inspirational online multivitamin- a dose of motivation and creativity that nourishes your spirit. Thank you for visiting this space. Please leave a comment and let me know what you think! Contact me at kathianne.williams[at]gmail[dot]com

All writing and original artwork is copyrighted. Stealing isn't nice. If you want to link to a post feel free. If you want to use an image, just shoot me an email. Thanks for respecting me and my work. I really do appreciate it!